It might be spelled the same, but there's nothing pain-ful about eating pain!!

Here at La Cuisine, we get lots of questions about French bread. With so many types and specifications to keep straight, it’s no wonder. In light of those questions, we've created a little guide to help you navigate the various breads you'll find in Boulangeries throughout the city. During your French Bread endeavors, hopefully this will help you with the what’s-what, the vocab, and the fun facts, plus some tips and tricks for buying the best loaves in the city.

If you LOVE French Bread and want to join us from your home kitchen, be sure to check out our French Bread Basics Video Class! 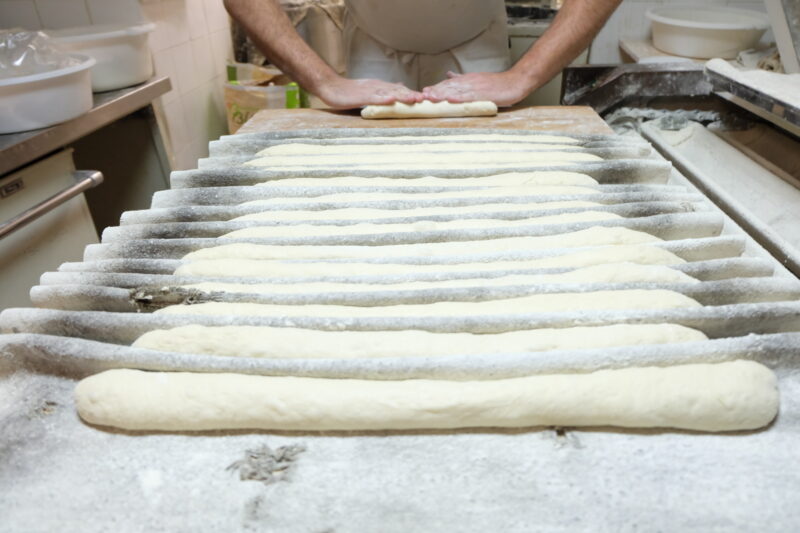 Baguettes in the making

First and foremost : where can I buy bread?

And where can I buy the best?  The easy answer is the ‘best’ will always be the one you enjoy the most, however one good indicator in France is to look for the word Boulangerie.  It's a great honour to use this term – and it's one that certainly cannot be use willy-nilly. French law dictates that in order to qualify as a boulangerie - beyond a number of administrative and legal requirements (including needing to seek approval before closing up for a vacation !) - one of the most important rules is that the bread must be made completely on site. It cannot be shipped in from a central distributor or baked from pre-prepared dough.

As far as which boulangerie to go to, ask around or taste around! Any Parisian is sure to have a recommendation. Ultimately, though, trying lots of different places (what we like to consider cultural research) is the only way to find the boulangerie that suits you best, because everyone’s tastes are a little different.  If you want to know our favorite, we have two we frequent:

Au Petit Versailles du Marais, just behind us at the school, and it happens to be run by a MOF - a Meilleur Ouvrier de France (another term you'll want to learn about)

La Parisienne, which we love to stop at while we are at Marché Maubert!  They also happen to have been winner of a very special designation which we will talk about below. 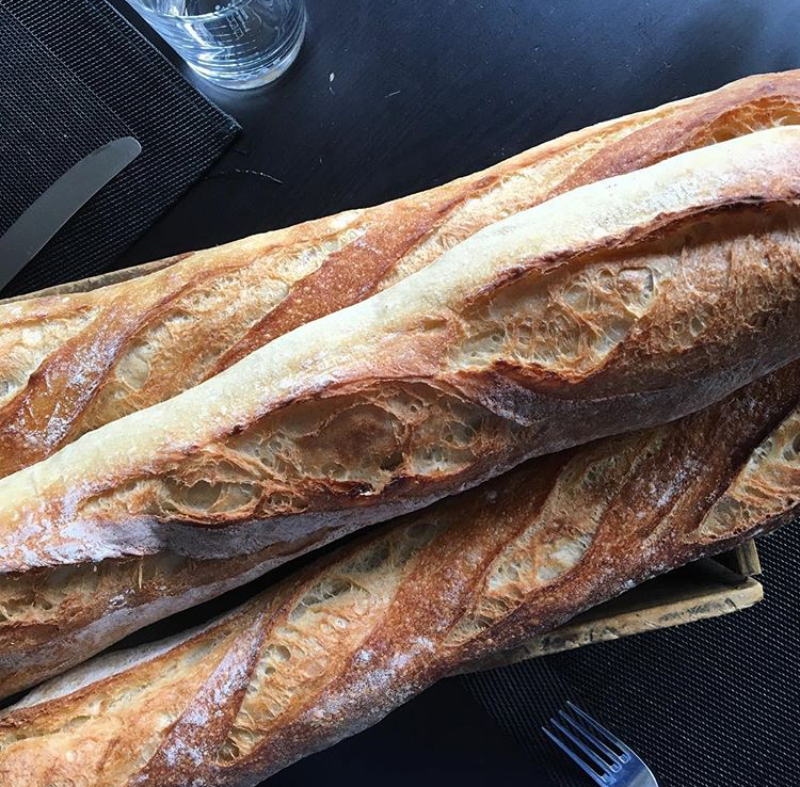 I have found a Boulangerie :  what types of Breads can I buy?

The most popular French bread you will certainly know is….

So again, a very special term that cannot be easily thrown around, the French government has very specific guidelines for defining and regulating the beloved baguette. A ‘baguette’ must weigh between 250-300 grams, measure between 55 and 65 centimeters in length and can only contain four ingredients: flour, salt, yeast, and water. Lastly, they are price controlled in France.

Considering their four ingredients, with no preservatives, their shelf-life tends to be short. So, if you don’t think you’re going to finish a whole baguette by the end of the day, don’t count on finishing it up tomorrow. Instead, ask for a demi-baguette: there are a number of Boulangeries that will be pleased to sell you half of a baguette.

Despite the strict rules surrounding their production, baguettes can still vary quite a lot from baker to baker. Any true Parisian has their favorite place to buy baguettes, and the competition between bakeries can be fierce.  Baguettes are such a serious topic that each year there is the Grand Prix de la baguette de tradition française de la Ville de Paris (Grand Prize for Traditional French Baguettes in the City of Paris – what a mouthful!).  For example, the best baguette in Paris for 2016 was La Parisienne, which we mention above! What's more, you can find a map for all the winners for the last years just here.

And what is the award, besides a flow of clientele that will cross Paris to get a nibble?  Amongst other things, the most notable part of the award is that the winner gets to deliver their fresh breads to the Élysées Palace…i.e., The President of France.  Sounds more like stress than an award to us… 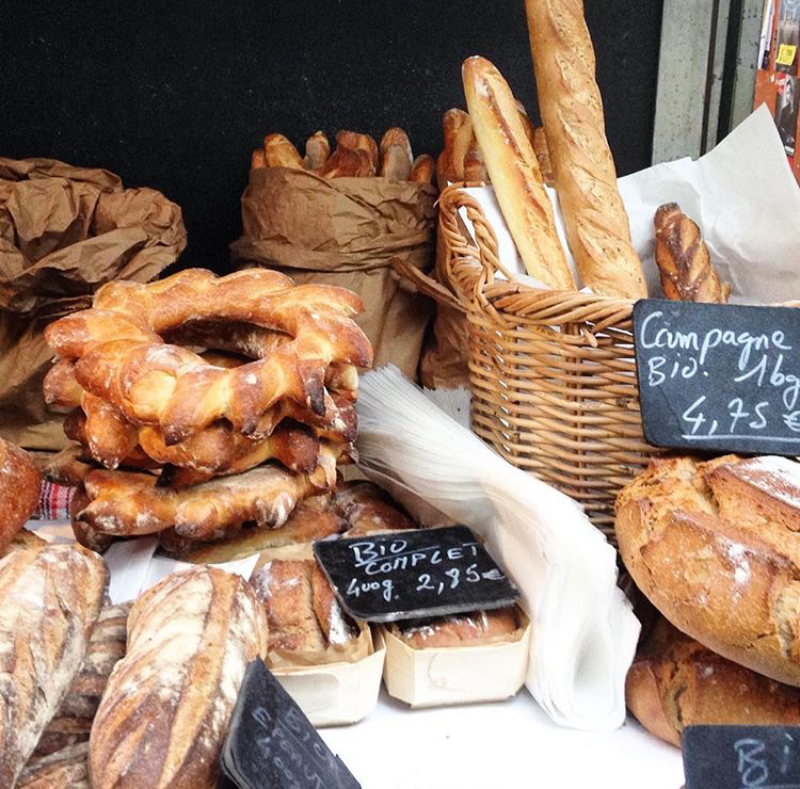 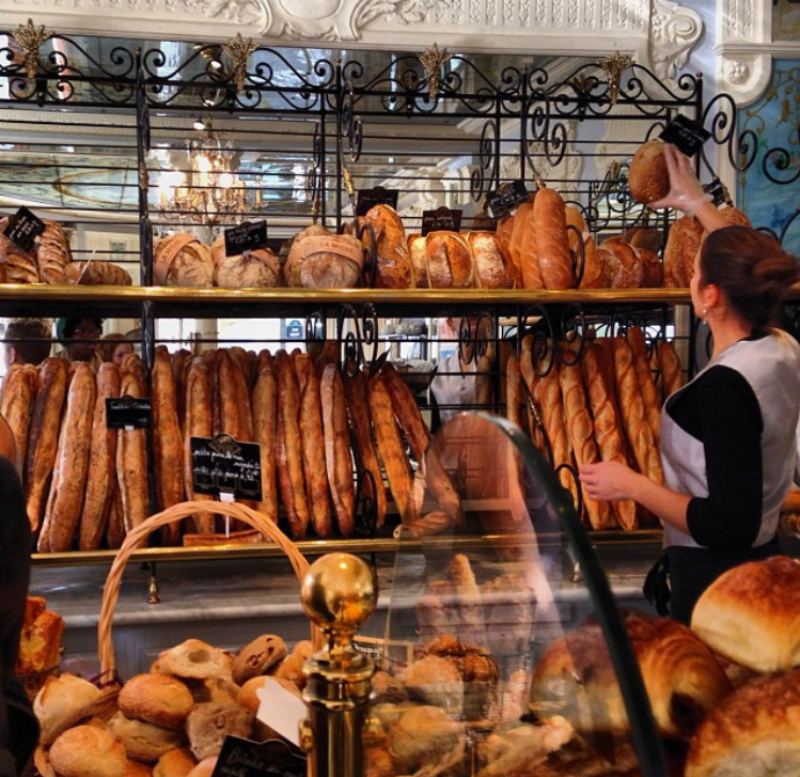 Beyond a Baguette : what are the other breads available ?

Keep in mind that the baguette, while amazing, is only the tip of the iceberg of French bread. There’s so much more to taste and explore!

This list certainly is not exhaustive, each boulangerie has its own selection, but we’ve made this list of French bread-related vocabulary words to help you navigate.  If you look around you will see that boulangeries have their own unique shapes and creations.  One great example being the ‘tradition feuilletée au sel de guérande création la parisienne’ which we love to pick up at La Parisienne (photo below).

La baguette: A long cylinder shaped bread made of flour, salt, yeast and water. Weighing in at 250-300 grams, and measuring between 55 and 65 centimeters in length

Le pain de compagne : « country bread » This is a hearty round loaf, usually a sourdough bread

La Baguette de Tradition (or ‘Tradi’ if you are cool) : very similar to a baguette, but with the allowance of small variations on the type of flour used.

La ficelle : similar to, but thinner than baguette which weighs 100 grams ( literally « string »)

La flute: a thicker version of the baguette, we've see this called a parisienne in the United States

Torsade : resembles a very small and thin baguette with ingredients, such as fromage, lardons, olives, etc.

La Fougasee : A provincial bread, often with olive oil and savory ingredients such as fromage, lardons, olives, etc.  Think of it as a French focaccia 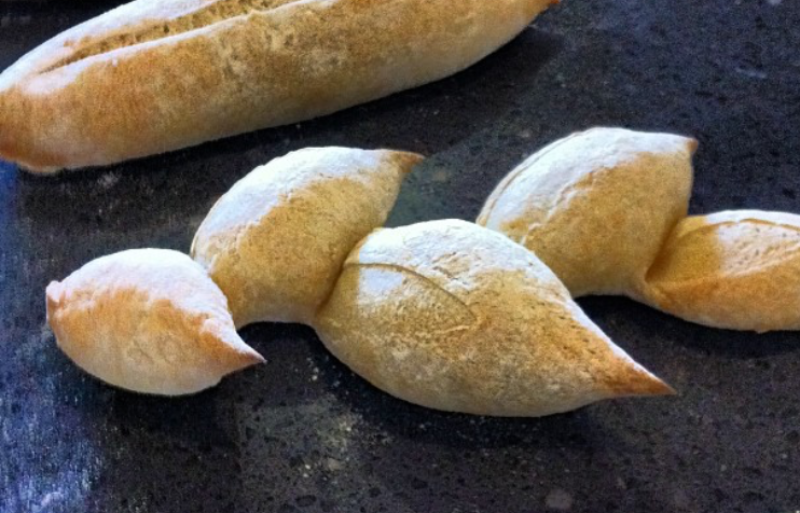 The Epi is perfect for sharing, just break off the little pieces 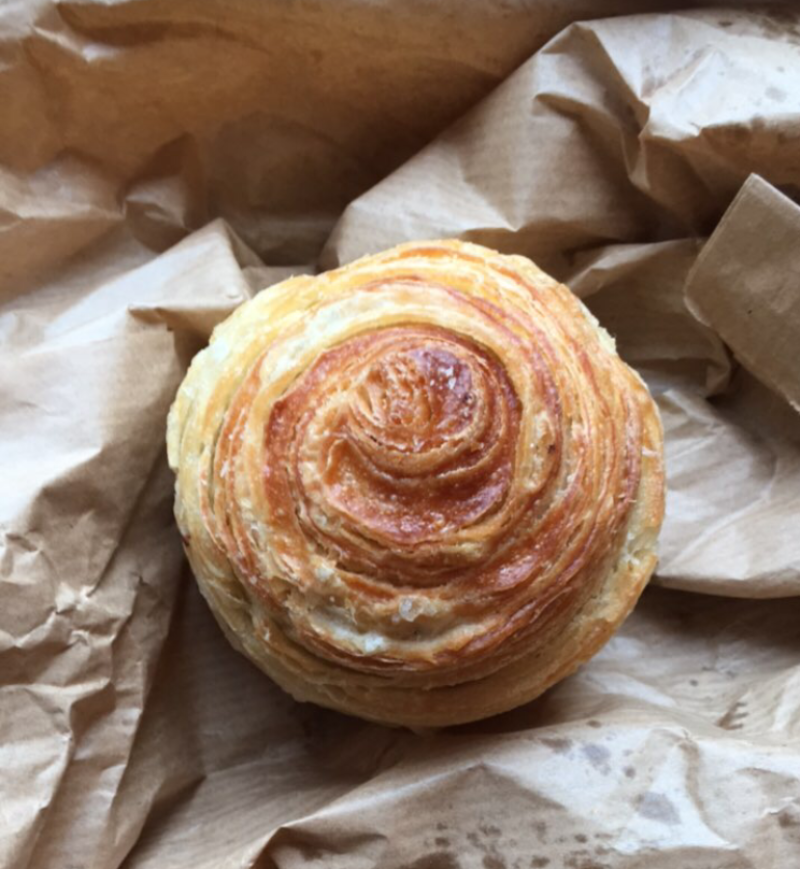 La levure / Le levain : yeast .  This is really one of the major deciding factors in what makes the BEST bread – the yeast (or homemade version the bakery will use).  Many of them having a family recipe passed down for years!

Le crouton or quignon :  It’s a sacred piece of the baguette (in our opinion) there are only two per baguette…you guessed it, the crispy ends

Bien cuite or bien dorée : well cooked, nice and golden - you will often here people specify what 'type' of Baguette they want when they order it

Pas trop cuite or bien blanc : not too cooked, a little more pale, a little less ‘crunchy’  - you will often here people specify what 'type' of Baguette they want when they order it

Lame : the handy razor blade tool to make the markings on the bread…imagine the slits you see on the top of the Breads

Scarification du pain : literally the action of scaring the bread with the ‘Lame’ 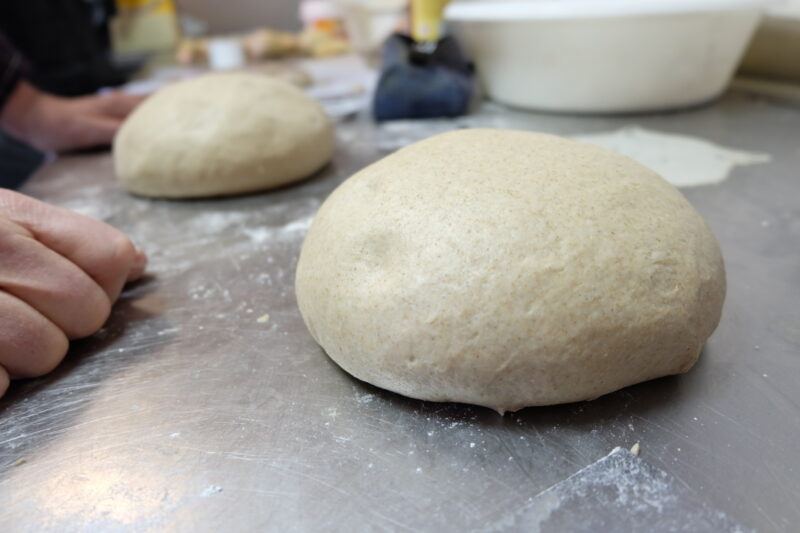 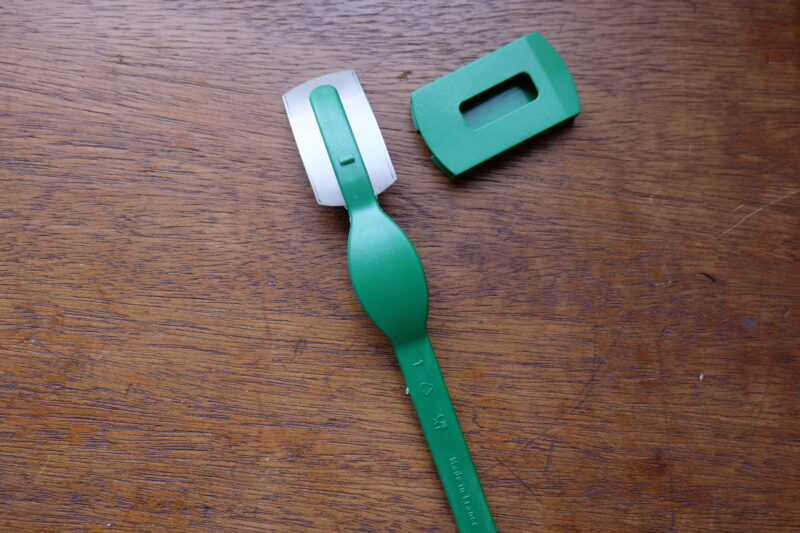 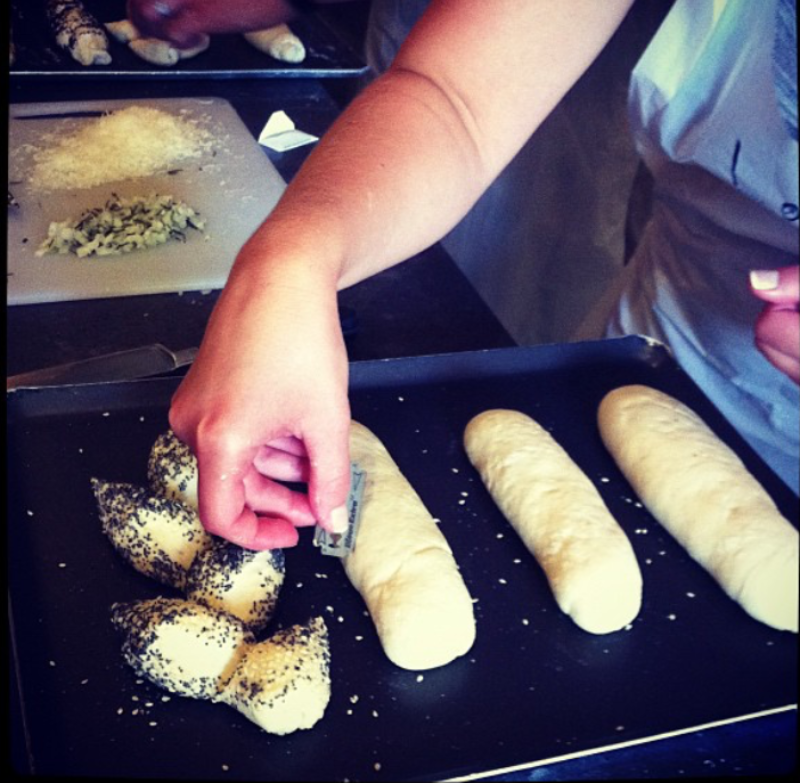 Seeing people walking down the street with fresh baguettes under their arms or sticking out of their bags is one of our favourite parts of living in Paris. It’s one of the French stereotypes that can shock you with its veracity.  And who can resist nibbling on the tip of the baguette on the way home? So join in the national march, go explore your local boulangerie with confidence, and enjoy your walk home with fresh / warm baguette under arm, whilst nibbling on the crouton!

And don't forget, you can always join us to make your own in a three-hour bread adventure, or how about our 2-day bread baking Masterclass? 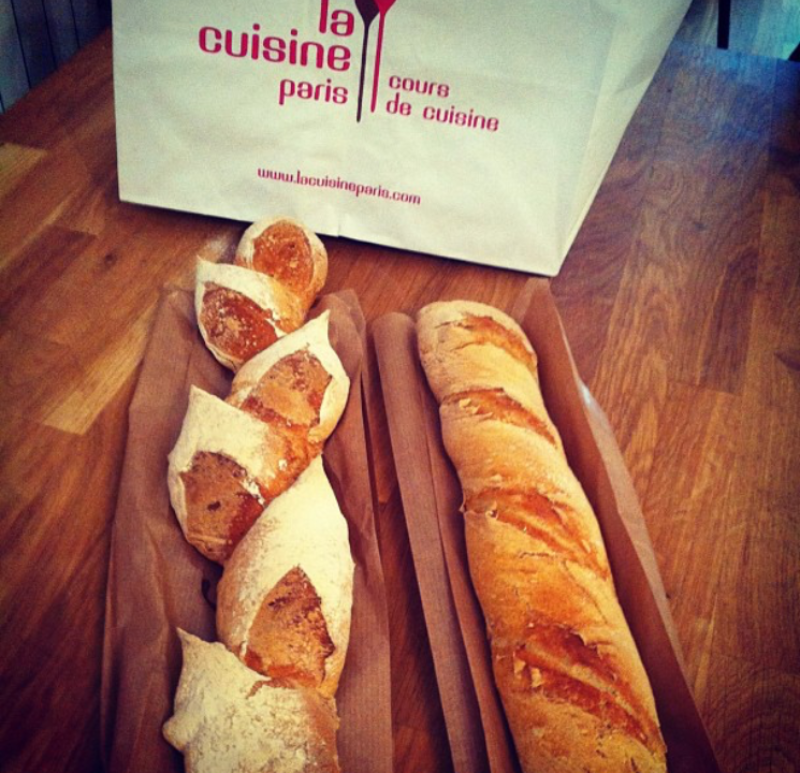 Fresh out of our class in Paris!

A perfect addition to any dessert is the decadent Crème Anglaise (English cream), a dessert staple to add to your cakes, tartes, or even ontop of fresh fruit!